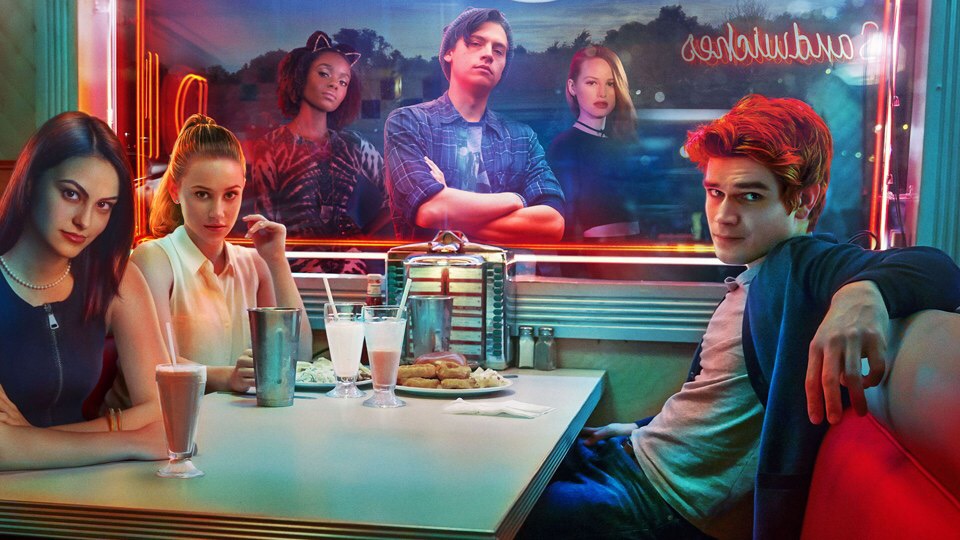 Based on the comic books named Archie is CWs latest hit tv show that has been described as a cross between Dawson’s creek and twin peaks, and I can see why. It’s got the angsty teen drama of Dawson creek and one big murder mystery that suuroded the mojority of this season, like twin peaks but without the supernatural element.

Archie: A singer/ songwriter who struggles to please his dad and his football coach as he tries to chase his true passion for music and becoming a musician. He is also quite popular with the ladies of riverdale, with the likes of Veronica and Betty, causing a awkward love triangle and he even had a affair with his music teacher, miss grundy.

Betty: She is the smart, sweet girl next door who seems to the outside world as the perfect daughter, sister and student but also seems very troubled with a very controlling mother.

Veronica: A confident former socliate who is the new girl in towns trying to leave behind the girl she was before and become a better more kinder person rather than a spoilt rich girl that she was before her father was arrested for embezzlement and left her and her mother with no money or social status.

Jughead: He is an outsider who wants to become a crime novelist, who was dertaimined to solve the murder of Jason blossom, and who quite frankly did a better job than the police did. He seems very troubled like he is carrying the weight of the world on his shoulders, yet he also seems the most level headed of the whole group.

Josie: She is the fiesty front lady of the band Jodie and the pussycats. She is full of attitude and will take on anyone who dares to question her musical talent.

Cheryl: The sister of Jason blossom, Cheryl appears at first very vain and manipulative but as the season progresses it appears that she does have a more softer side and is very vulnerable and there is so much more to her than just being a rich bitch.

Its the big question that is main focus of the first season and let me tell you there were plenty of suspects  and so many different theories online of who shot and killed Jason blossom. It’s the murder that brought the town of riverdale secrets to the surface and the revelation of who killed the towns golden boy was very surprising to say the least. After he supposedly drowned on July 4th after going out on a boat on sweetwater river with his twin sister, Cheryl, we in fact learn later on that he was murdered, shot dead and his body placed in a freezer. Each episode reveals more details about Jason’s death and the dark secrets of the people who reside in riverdale all the way to the penultimate episode, which reveals some very shocking secrets.

What’s next for season 2?

Now that we all know who killed Jason blossom what’s next for the next season of riverdale. We been told that this season will be darker and weirder and considering the cliffhanger at the end of season 1, it sets up the next season for a whole lot more drama. Mark console us has also been confirmed as Veronica dad, Hiram lodge. There’s also a lot of rumours floating around online about bringing in zombies into riverdale, like the comic afterlife with Archie, but i am hoping that it’s just a rumour as I’m not sure how that would work in this show.

I really enjoyed watching this show, it had a lot of very likeable characters that meshed very well together and I do love it’s dark and moody atmosphere. The story flowed really very nicely and every episode never seemed like it’s was a chore just to get to the episode in which they revealed the killer. It’s certainly a show that I would watch again and I will definitely be tuining in for season 2.

Start a Blog at WordPress.com.